Vicente has been designing Saatva Mattress showrooms across the country. In honor of Hispanic Heritage Month, they crafted this video citing his interior design philosophy interwoven with images of his creative process. In a career spanning 50 years, the Cuban-born interior designer has built his legacy from the ground up and shows no signs of slowing down. Here is their homage to Vicente In honor of #HispanicHeritageMonth.

Wolf was delighted to add his interior design vision to Saatva’s NY flagship store on December 4, 2019 (as well as the upcoming opening of their Washington DC and Los Angeles locations). The Viewing Room, as they call, “is a sensory experience that represents what Saatva stands for,” said designer Vicente Wolf. “When you enter, it’s about evoking a dream-like experience as customers meander through the space and discover the beds.”   With a nod to the warmth and drama of an upscale emporium, Vicente Wolf Associates designed a space that has a whimsical, dreamlike quality.  Without the harsh fluorescent lighting employed by other mattress companies, Vicente incorporated a sophisticated, neutral palette of taupe and grays wrapped in a surreal landscape, guests are swept away to explore and experience Saatva’s full range of luxury sleep products.  Design elements include, a stair sculpture built into the wall, large Greek urn, two silvery ‘fantasy trees,’ striking recessed ceiling cutouts that evoke the sky and several distinctive seating arrangements interwoven between bed displays in various settings.  Shoppers experience an environment that, by design, will evoke a restful ambiance.  Visit their flagship NY viewing room to see Vicente’s work.

Reflections of an Interior Design Titan

It’s been two weeks since the 2021 Elle Décor magazine’s A-List of top interior designers was announced.  Though I have been on this esteemed list for more than two decades, it was an utter surprise to have been selected as one of two dozen industry TITANS.  Apparently, the Titan honor roll celebrates exceptionally influential talents, which I must say, is quite humbling.

Personally, there is a juxtaposed of feeling bafflement while simultaneously feeling profoundly rewarded for reaching this point.  Without a formal education beyond high school, I pressed through early adversity as a Cuban refugee with severe dyslexia, that made traditional schooling near impossible, coupled with bountiful early failures.  After moving to New York as a young man, I’d been fired from many jobs; trust me, it was not an easy path.  I could only rely on my own tenacious appetite to learn by exposing myself to things that inspired me; training myself to trust my gut and fight for my principals.  My fortune began changing with the exposure of my work in design publications that in no small way propelled my career.

But each day there were always new opportunities to conquer challenges.  In my early years it was difficult, even scary dealing with project hiccups (there were many) and clients (enough said).  Through experience – and a confidence that can only be achieved by experience will a budding design firm learn to properly deal with the ‘business of design.’  Adding to that is today’s unfortunate pace of the world that’s increased exponentially – thank you internet, which adds another layer to instability and vulnerability.

For these reasons I find myself embracing my role as a mentor.  Recently, I also had the honor of judging a magazine’s Home Design Awards.  All this have afforded me the opportunity to become acquainted with young designers and their work as they are launching their careers.  I cannot help putting myself in their shoes.  With the shifting availability of media and the plethora of design information at everyone’s fingertips, their paths will necessarily be different than mine.   Young interior designers are certainly challenged to gain footing in their chosen industry.

From where I stand, it’s critical that novices define their business goals.  Do they want more clients?  Higher profit margins?  Would they want to work in partnership?  Seek media acclaim?  Or simply preserve a sustainable, livable practice.  However, their business is sculpted, they must develop their own style vision and to maintain professionalism in all presentations and practices. 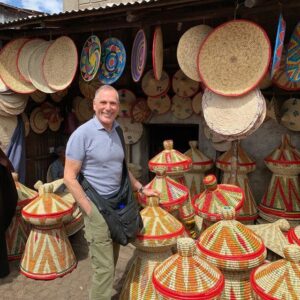 Vicente Wolf, a 1998 Interior Design Hall of Fame inductee, has stood at the pinnacle of the industry for many decades. In 2019, his eponymous firm celebrated its 45th anniversary, an occasion many would use to celebrate the past, but Wolf’s creative engine moves in one direction: forward. The designer, photographer, and five-time book author is very much inspired and informed by his frequent travels, during which he sources artifacts and furnishings for his modern-minded interiors and his showroom, VW Home by Vicente Wolf. Always moving, he takes time out of his busier-than-ever schedule to reflect on the current cultural moment and his recent work.

With the PPG Booth and Materials Featuring His Work 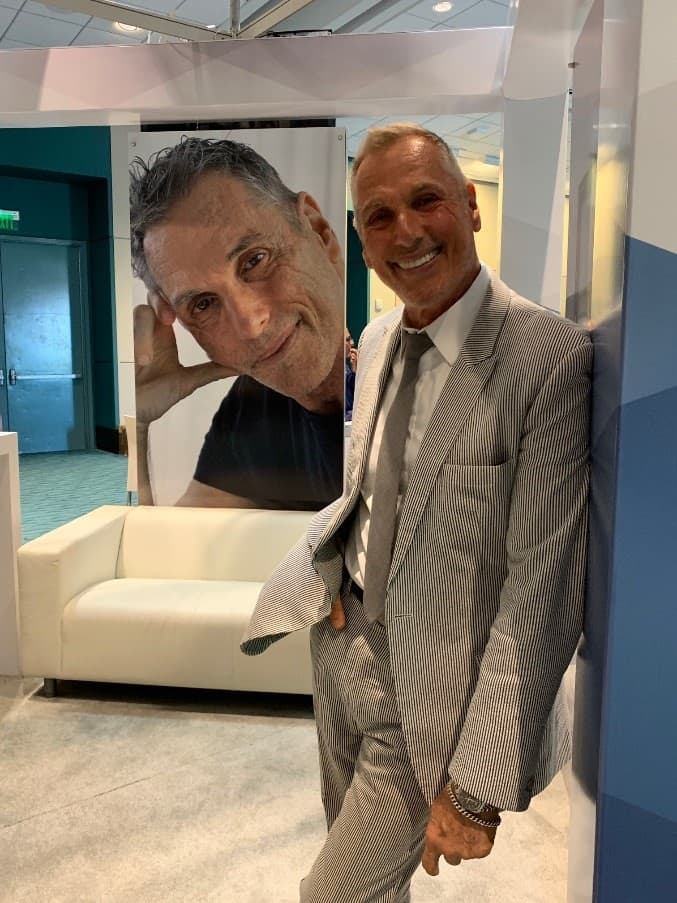 PPG Paint spokesperson, New York-based designer, Vicente Wolf is always thrilled to talk about the impact of color. On August 22. 2019, he brought the conversation of color to a receptive audience of professionals for Continued Education Credits at PPG’s Puerto Rico Pro Summit in San Juan. The architects, interior designers, contractors and engineers were delighted to hear Vicente’s philosophy on color, trends and how his experiences traveling the world influence his concept of color in his own interior design process. At the event Vicente had the opportunity to connect with the invitees and present the colors he chose for his PPG color palette and color tools. View PPG articles on his own philosophy on color in his own interior projects.

“It was great to be able to talk to designers, especially to fellow Latinos, about the strengths, quality and choices that one has with PPG,” stated Vicente. Sharing his years of experience in the world of color, lively conversations about strong vs. soft hues, saturated vs. less intense and how light affects the experience of color were dissected. He went on to say “Always, when you’re dealing with Caribbean light, colors take on a different perspective than the way they do here in the North East.” The sea and joyous spirit of the island cultures also influences color selections. Hence, in the islands, it’s common to see shades of coral, aqua, canary yellow, fuchsia and tangerine.

Please click any image below to begin a slideshow. 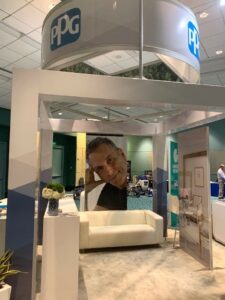 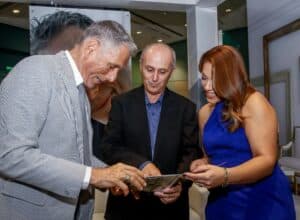 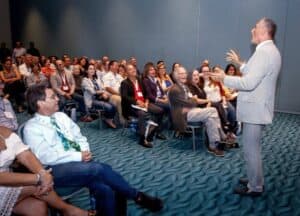 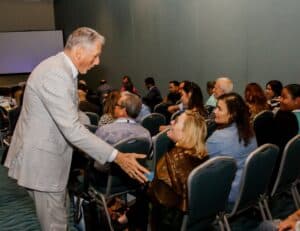 Vicente has fun with a one to one interchange 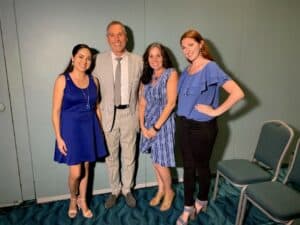 In my 45 years at the top of the design industry, I have had the pleasure of working with many high-profile clients including international hotels and restaurants.  Still feeling like the lad who immigrated from Cuba, I am so very humbled by the attention given to my work.  They’ve described me as a visionary, trailblazer, pioneer and yes, a genius.  What compliments – and a little embarrassing.  Starting in the industry in the early 1970’s as a stock boy at a wallpaper showroom in the D+D, I quickly moved on to salesman, then, connecting with interior designer Bob Patino we formed Patino/Wolf Associates.  In 1988, I formally opened Vicente Wolf Associates – and in 1999, VW HOME. where I make treasured items such as authentic tribal artifacts sourced on my annual treks to remote areas, as well and other collections available to designers and design enthusiasts.

Early on, my name became synonymous with white rooms, earning the moniker “The White Knight.” I have also played a big part in introducing high gloss walls, leaning mirrors, curved sofas, leather sectionals on wheels, the photo picture ledge, use of black and white photographs and over-sized, upholstered ottomans as coffee tables into contemporary residential design.  Having been blessed with a unique eye, I have been honored with appearing on every top designer list, in every important shelter publication and created product collections for numerous manufacturers and authored 4 design books (and working on my 5th).  Given all of these accolades, I am most proud of receiving an Honorary Doctorate degree from Boston Architectural College in 2012.

And a huge thank you to all of the publications that have recognized my work.  For example, I have been one of the ten most influential designers in the US by House Beautiful, inducted into the Designer Hall of Fame by Interior Design Magazine, repeatedly on Elle Décor’s A-List, recognized by Traditional Home as a Top 20 Designer, named by Architectural Digest as a Top 100 Designer, awarded the Innovator in Design by Cottages & Gardens and recently appeared in the celebrated book INTERIOR DESIGN: The 100 Most Influential Designers of the last 100 Years (Vendome, 2018).  I’ve enjoyed creating the numerous show house spaces I’ve been privileged to do, including the prestigious Kips Bay Decorator Show House, which I will again be participating in for 2019.

See my latest project in the pages of @milieumag Spring 2017 issue. Get your copy today! 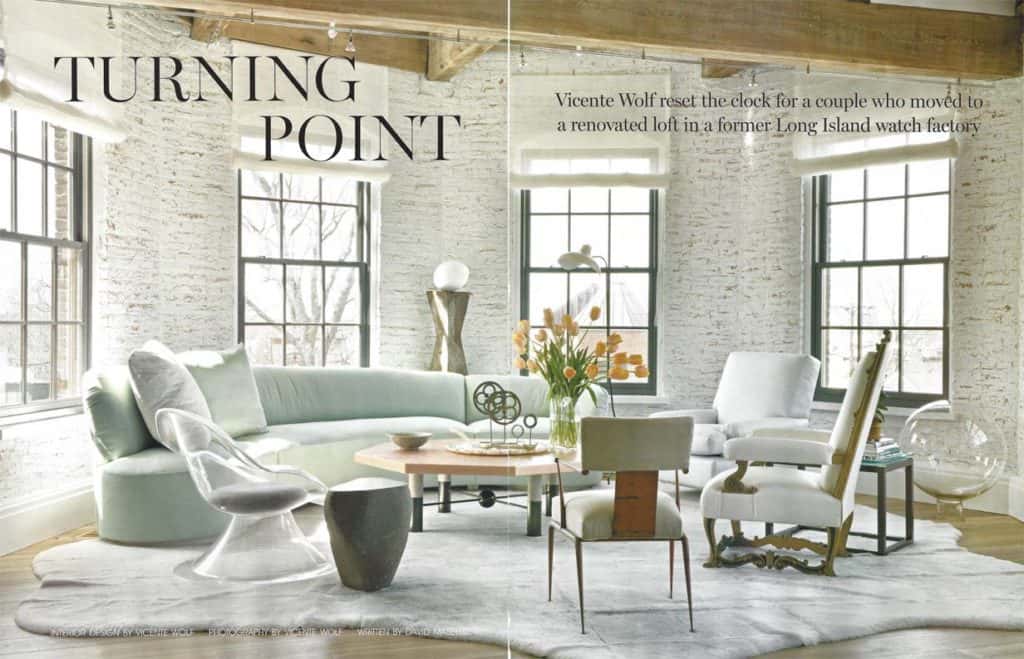 For more information about the items seen in this article, please contact

or contact our Showroom Director, Trudi Romeo at [email protected]